In an off-grid solar power system, generated electricity must be stored for later use when the sun isn’t shining. Not long ago when fossil fuels were cheap and plentiful, running a diesel, gasoline or propane generator when power was needed was sufficient. That is, if you didn’t mind the noise, the smell, and the hassle of hauling large containers of flammable fuel. By the early 21st century, the low costs of solar panels has made it economically feasible to junk those noisy, smoke-belching generators.

Solar panels, often augmented with hydro or wind turbines, are now the best way to economically generate power. Hydro runs constantly and wind turbines are effective with prevailing wind speeds of 12 knots or more. With no moving parts to break, solar is by far the most efficient and reliable method of generating power. Battery storage is how we store this power for nights and cloudy days, but batteries are expensive. With evolving battery technology, cost is coming down and power storage is increasing. 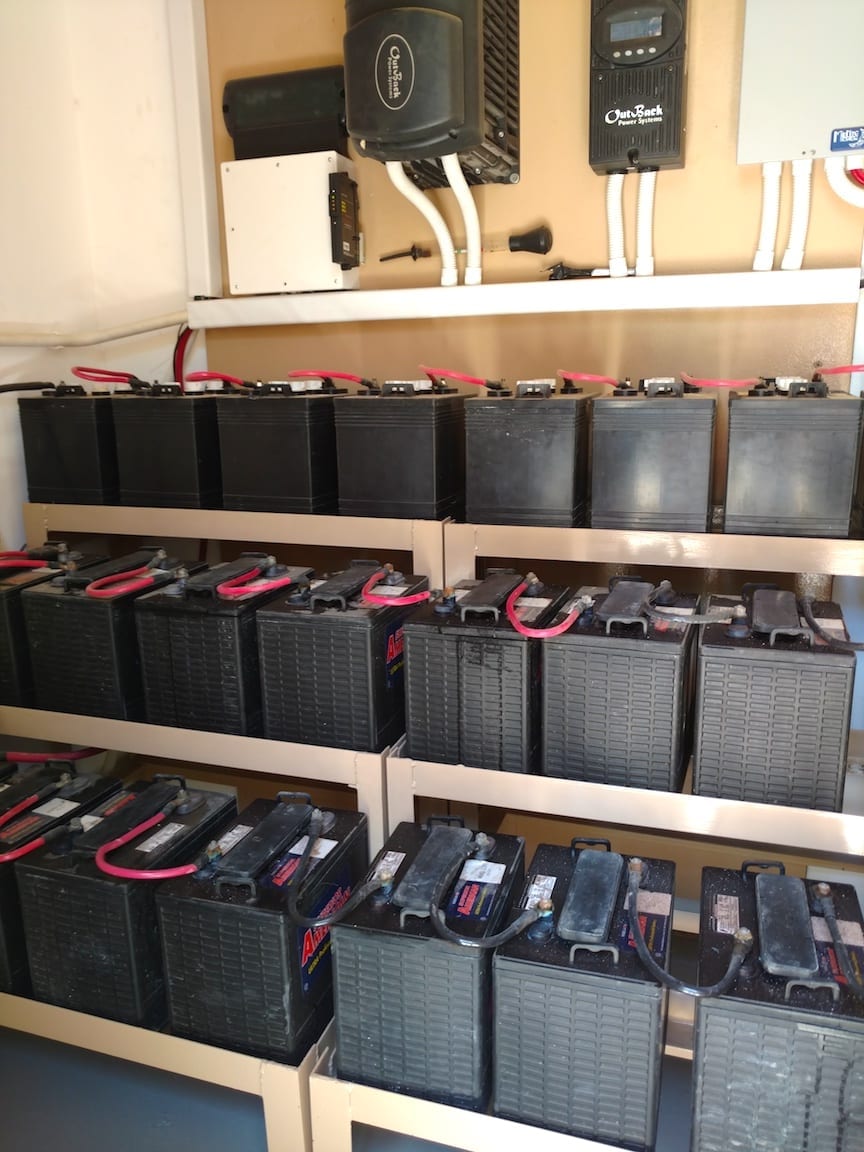 FLA batteries, 200 Amp Hours.
On our off-grid system in coastal Belize, our FLA (Flooded Lead Acid) batteries represented a large investment. But they were the least expensive battery alternative. FLA batteries have a life span of 7-10 years, and shorter in salt-water environments. We began in 2009 with 32 FLA “gell cell” batteries, rated at 200 Ah (amp hours). With a 2k wind turbine and very occasional backup from a 2k propane generator, this system powered air-conditioned our lodge, with its modern kitchen and workshop. After 6 years, some of our batteries began to fail, especially after we put additional loads on them over time. We replaced some batteries, but at year 8, most of these “old” FLA batteries were finished. Kaput.

So we recently replaced this entire bank of batteries, with 24 new FLA batteries rated at 2000 Ah, for a powerful 48v system. These are huge batteries, each weighing somewhere around 200 pounds each. Our 24 new batteries generate far more power than the 32 original batteries, and their total cost is about the same as the 2009 batteries. And if one were to spend, say, $22,000 on batteries every 10 years, it would work out to be similar costs as a grid power, with air-conditioning year-round, and a bill from Xcel Energy for $184 per month. This calculation is for FLA batteries, which in our port of the world are readily available.

If I could have easily found NiFe (Nickel Iron) batteries rated at the same amperage, these might reasonably last 20 or more years, even in our salt environment. But alas, NiFe was not available in Belize. Each battery type has its benefits and drawbacks, but I believe NiFe to be the best performing, longest lasting batteries in a situation such as ours. However right now, battery technology is improving fast, and if I had the luxury of waiting a year or two, I might have been able to cash in on these technological advances.

Lithium Ion batteries are getting better and better, but were not easily available for us. Plus, we were concerned about Lithium Ion batteries’ tendency to overheat, burn and explode. We’ll give these a few years to improve. Likewise with the new Tesla 10kWh “Powerwall”. The Powerwall system may be the wave of the future, but we need to see it in use first. Our need was immediate. For a 2,600 sq ft off-grid home, with AC and a pool pump. we would need 3 Powerwalls, rated at 10kw, costing approximately $16,500. This will certainly save us money over FLA and NiFe.

By the next time we upgrade our battery system, the technology will be greatly advanced. We will keep you posted.